Chest wall tumors can develop in the bones, soft tissues and cartilage of the chest cavity, which contains the heart, lungs and other organs. These tumors typically involve invasion or have metastasized from adjacent thoracic tumors, and are malignant in more than half of cases.

How is chest wall cancer diagnosed?

To diagnose your chest wall cancer, our specialists will carefully review your medical history and conduct a full physical examination. He or she will likely order additional tests, including: Bone density test Chest X-ray Computerized tomography (CT) scan Endobronchial ultrasound (EBUS) Endoscopic ultrasound (EUS) Incisional or excisional biopsy Magnetic resonance imaging (MRI) Positron emission tomography (PET) scan Our thoracic radiologists confine all their work to reading radiographic studies of the chest. They are highly skilled at recognizing chest wall cancers and patterns of spread. Our pathologists are internationally recognized as research leaders in the accurate diagnosis of rare sarcomas. The ability to provide a definitive diagnosis is invaluable to our multi-specialty treatment team. 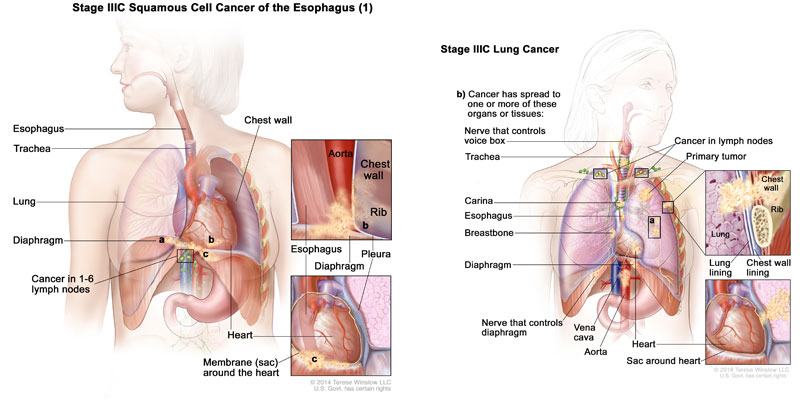 Chest Wall Cancer tumors can develop in the bones, soft tissues and cartilage of the chest cavity, which contains the heart, lungs and other organs. These tumors typically involve invasion or have metastasized from adjacent thoracic tumors, and are malignant in more than half of cases.

How is Chest Wall Cancer diagnosed?

To diagnose your Chest Wall Cancer, our specialists will carefully review your medical history and conduct a full physical examination. He or she will likely order additional tests, including: Bone density test Chest X-ray Computerized tomography (CT) scan Endobronchial ultrasound (EBUS) Endoscopic ultrasound (EUS) Incisional or excisional biopsy Magnetic resonance imaging (MRI) Positron emission tomography (PET) scan Our thoracic radiologists confine all their work to reading radiographic studies of the chest. They are highly skilled at recognizing chest wall cancers and patterns of spread. Our pathologists are internationally recognized as research leaders in the accurate diagnosis of rare sarcomas. The ability to provide a definitive diagnosis is invaluable to our multi-specialty treatment team.

In short, Lung Cancer is an abnormal growth of cells in the lungs. Lung cancer may eventually spread to other parts of the body if not discovered and treated early.

2. What are the risk factors for Lung Cancer?

Smoking is the single greatest avoidable risk factor for cancer. It is responsible for one in four of all deaths from cancer in the UK. Smoking causes around 90% of Lung Cancer

There are benefits from quitting, once you stop smoking, your risk of lung cancer starts to go down. 10 years after you've given up, your Lung Cancer risk is about half that of a smoker.

The most significant cause of Lung cancer is cigarette smoke (National Cancer Institute). Roughly 85 percent of lung cancers are diagnosed in former or current smokers; other cases may be caused by environmental exposure to materials like radon, asbestos or uranium, or secondhand smoke. Genetics can also play a role.

4. I have been smoking for many years? Why should I stop smoking now?

Lung cancer takes years to develop. The risk increases with each year of smoking, and with each cigarette smoked per day. Stopping smoking will reduce the risk of cancer developing. Smoking also increases the risk of other diseases, such as chronic lung disease, heart disease, stroke and other cancers such as head and neck cancers. Stopping smoking will reduce the risk of lung cancer developing as well as reduce the likelihood of developing heart and lung problems.  Smoking can also harm your spouse and family members

5. Do non-smokers get Lung cancer?

Yes, non-smokers can get Lung cancer, but the risk is much lower than in smokers. There are factors other than smoking that increase a person's risk of getting lung cancer. Breathing in other people's smoke, exposure to radon, asbestos, air pollution, certain chemicals in the workplace, and a personal or family history of lung cancer are also risk factors for lung cancer.

6. What Lung cancer risks are associated with second-hand smoke?

8.    What are the most common symptoms of Lung cancer?

This is a tricky one because sometimes there aren't any symptoms of lung cancer. One in four people don’t even have symptoms when their lung cancer is advanced. In other people, symptoms that may suggest Lung cancer can include:

9. What are the tests for Lung cancer?

There are a number of tests that can be used to detect lung cancer. However, most tests miss many early cancers, and are often ordered only after the patient has started having symptoms. Traditional lung cancer tests include chest x-ray, sputum cytology (analyzing cells in mucus), and bronchoscopy (using a tube through the mouth to look at the lungs with a tiny camera).
To confirm that a person has lung cancer, the doctor must examine fluid or tissue from the lung. This is done through a biopsy -- the removal of a small sample of fluid or tissue for examination under a microscope by a pathologist. A biopsy can show whether a person has cancer. A number of procedures may be used to obtain this tissue.

10. What are the standard treatments for Lung cancer?

11. What are the treatment options for the Lung cancer that has spread to other parts of the body?

Almost 60-70% of patients have advanced of Lung cancer. Further tests of the biopsy specimen to subtype the cancer further may help determine whether chemotherapy or targeted therapy will be more suitable. The goal of treatment in such cases is to improve quality of life and/or reduce symptoms and also prolong the survival. Currently, such patients live longer and also well.

12. What types of surgery are used to treat Lung cancer?

Depending on the extent of the cancer, the surgeon may decide to remove part or all of the lung. Taking out a part of the lobe of a lung is called a segmental or wedge resection. If a lobectomy is performed, an entire lobe of the lung is removed. This is usually the preferred surgery for lung cancer if it can be done. A pneumonectomy is the removal of an entire lung. A sleeve resection removes only the part of the bronchus with cancer. The lung is then reattached to the remaining part of the bronchus. Although these surgeries are done by open thoracotomy, video assisted thoracoscopic surgeries (VATS) at performed at our centre through keyholes.

13. After a lung is removed, what happens to the space that's left in the chest?

Space left after surgery becomes filled up with body fluid and scar tissue and the other lung usually expands. Until this happens, there may be a feeling of emptiness on the side of the operation.

14. Can I breathe and live normally if I have a Lung removed?

Most likely, depending on your lung function before the surgery. The removal of 1 or 2 lobes may limit hard physical exercise. Otherwise you should be able to breathe and live normally. If you have an entire lung removed, you may become short of breath when you exert yourself, but at rest you will breathe normally. Breathing exercises will help you adjust to this.

15. What are some common side effects of Chemotherapy?

The most common side effects of chemotherapy include nausea and vomitting , however, medications known as antiemetics are available to help control these side effects. Other common side effects include mouth sores, fatigue, anemia, dizziness, infection, pain, hair loss, and loss of appetite.

Yes, temporary side effects like nausea, vomitting, hair loss, and fatigue usually go away following the completion of treatment.

17. Can I work during treatments?

Some people benefit from keeping to a regular work schedule with flexibility if they don't feel well. Some schedule chemotherapy for Fridays so that they have time over the weekend to recover. Others may want to take medical leave from work. Talk to your oncologist.

What is Esophageal  Cancer ?

Esophageal cancer can develop when cells in the soft tissues lining this tube begin to grow and divide abnormally, forming a tumor. Tumors typically start in the innermost layer of the esophagus and then spread outward. The spread of cancer from the esophagus to the lymph nodes and other organs is called metastasis.

What are the types of Esophageal cancer ?

Most esophageal tumors can be classified as one of two types — adenocarcinoma or squamous cell carcinoma.

Adenocarcinoma is the most common form of esophageal cancer in the United States, accounting for more than 50 percent of all new cases. It starts out in glandular cells, which are not normally present in the lining of the esophagus. These cells can grow there due to a condition called Barrett’s esophagus, which increases a person’s chance of developing esophageal cancer. Adenocarcinoma occurs mainly at the lower end of the esophagus and the upper part of the stomach, known as the gastroesophageal junction or the GE junction.
Adenocarcinoma of the esophagus occurs most often in middle-aged white men. Since the 1970s, the disease has become more common more rapidly than any other cancer in the United States. Doctors say the rise may be due to an increase in the number of people who develop gastroesophageal reflux disease (GERD), a condition in which contents from the stomach, such as acid, move up into the esophagus repeatedly, causing chronic inflammation.

Normally, a sphincter muscle at the end of the esophagus opens to allow food to enter the stomach and closes to prevent harmful digestive acids from bubbling back up into the esophagus. When this sphincter muscle does not function normally, however, it can lead to a condition known as GERD. Studies have shown that having severe GERD over the course of many years increases the chance of developing gastroesophageal adenocarcinoma.

What are the Symptoms of Esophageal cancer ?

The following are the most common risk factors for esophageal cancer.

Screening refers to any test that is given to detect disease before it begins to cause symptoms. Screening for esophageal cancer is not recommended for most people. However, your doctor may recommend regular endoscopic screening for adenocarcinoma if you have been diagnosed with Barrett’s esophagus or are at high risk of esophageal cancer for other reasons.

Dedicated surgical oncologists, medical oncologists, radiation oncologists, gastroenterologists, radiologists, and pathologists work together closely to develop every patient’s treatment plan. We meet regularly to discuss individual patients and the latest advances in treatment.T his team approach is particularly important in the treatment of esophageal cancer because it is often best managed using a multidisciplinary approach. Having representatives of many different disciplines involved in your care ensures that all possible approaches to your treatment will be considered and that your care will be well coordinated and personalized to your specific needs.

Getting an accurate diagnosis is the first step toward getting the best cancer care.

Staging the tumor requires performing one or more possible studies, including:

When Surgery Is Performed

Whether your doctors recommend surgery as the initial treatment for your Esophageal cancer depends on several important factors, including:

Alcohol Increases the Risk of Cancer